Slang and Euphemism by Richard A. Spears 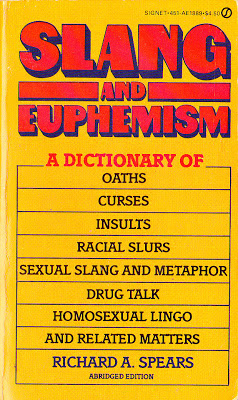 I'm not particularly inclined towards using slang in so-called intelligent discussion but it's place in common conversation is well-cemented and highly acceptable. I have a larger hardcover full of slang words but rarely even look at. This book, however, has both an excellent title and retro looking cover, not to mention it's in massmarket form which for older titles is always a boon since they have a certain mystique about them that the contemporary photographic covers lack. A few random words follow:

street up for repairs the menses. See ROAD UP FOR REPAIRS. [British and U.S. colloquial, 1800s-pres.]


Amo, Amas, Amat and More: How to Use Latin to Your Own Advantage and to the Astonishment of Others by Eugene Ehrlich 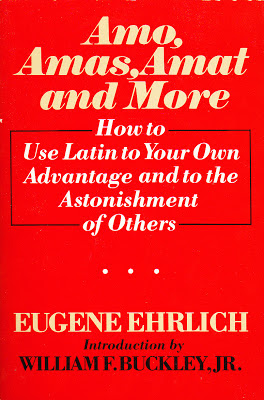 French, blah! Often lyrical but too pretentious overall. Spanish, well... this gringo couldn't be bothered to learn it despite taking it several times in college. I always thought that if I was to learn a new language it should be Latin. Although it sounds ridiculous it intones official business as if the person speaking it were in a secret cabal of sorts. Hell, they usually are too. But I didn't and so here we are. And a few examples:

I shall not wholly die

This was Horace's way, in the Odes, of telling the world that his works would live forever. Not a bad call.

Literally "you have arrived after the feast." This expression can be invoked whenever the overly cautious have let opportunity slip through their fingers. (See CARPE DIEM.)

we dare defend our rights

The motto of Alabama, perhaps calling attention to that state's dedication to protecting its rights against infringement by the federal government. 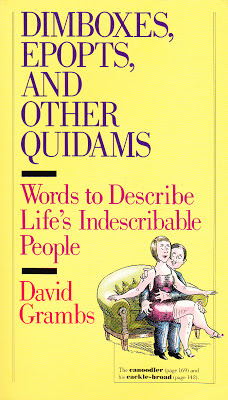 This is another of my newly rediscovered books that I thought I had lost, given away or sold only to find in a box in the garage. As such, I haven't read the book in ages. The title and the illustrated words (Well... one of them at least since I think we all know what a canoodler is) on the cover will provide the fodder for this book's word samples.

dimbox (dim'boks') The smoother-over of disputes, an expert at getting others to make up 9and not at all to be confused with a dim bulb). If you need an irenicist--a calming influence, a human peace pipe, somebody neutral to help bury your hatchet--here's your third party. Newspapers today never seem to want to refer to veteran mediators and expert negotiator as capable dimboxes.

epopt (ep' opt) Anyone initiated into or instructed in a secret system, or a tyro of the cryptic. The original epopts were students of religious mysteries. In the modern world, the epopt is given a set of keys to other secret systems, from fraternity rituals to clandestine espionage procedures. One who interprets or initiates others into mysteries is a mystagogue.

quidam (kwĪ' dam) While the special individual or V.I.P. whom you know isn't just anybody, the quidam is just anybody: one who is unknown or unnamed, an uncertified certain person. In short, a what's-his-name (or what's-her-name). This makes a person who used to be such an anybody but who is now a definite Somebody a quondam (erstwhile) quidam.

cackle-broad (kak' əl brôd') The wealthy and fashionable society woman who talks in the way that such women do, at cotillions, teas, lawn parties and polo matches: in the language formerly known as Scarsdale lockjaw and perpetuated along Philadelphia's Main Line. A highfalutin rich dame. 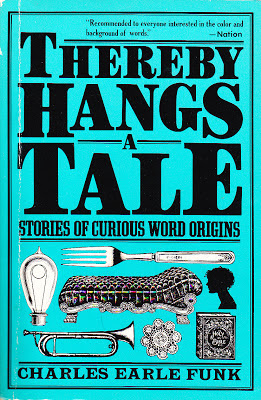 One things for certain, whether or not you like the books, is that all the authors of these sorts seem to have fairly lyrical names. That aside, this book is a bit of a standard education on normal words. I'll try to pick out a couple lesser knowns.

In its original sense defalcate meant to cut off by a sickle." Its Latin source, defalco, was formed from the preposition de, off, and falx, sickle, and that was the literal sense in which the word was employed in Medieval Latin. After its introduction into English speech, however--possibly from the notion that grasses cut with a sickle are then to be taken away--defalcate was used in the extended sense, "to take away." This has become its usual meaning, chiefly applied to the embezzlement of money.

Someone with a sense of humor, back near the beginning of the nineteenth century, must have remembered his Bible when he first beheld a huge brandy bottle. He was reminded of the verse which says, "And the man Jeroboam was a mighty man of valor" (I Kings 12:28), and the one, also about Jeroboam, "who did sin, and who made Israel to sin" (I Kings 14:16). This unknown wit thereupon christened this large bottle, Jeroboam, a name by which it is still known. It may have been the same man who gave the same name to an unusually capacious bowl or goblet at about the same time. Through confusion with a later biblical king, the latter vessel is also called a jorum or joram.


Poplollies and Bellibones: A Collection of Lost Words by Susan Kelz Sperling 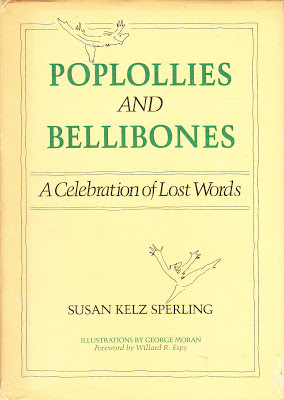