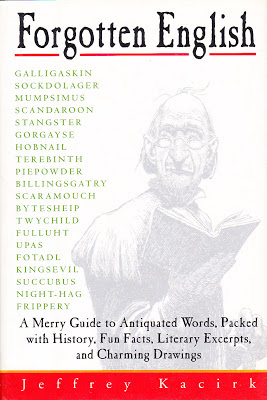 Just as writing a blog everyday is the pinnacle of tedium, trying to cram too much information into one post mirrors that daunting task. You forget 75% of the imparted material and lose your reader. Luckily I have no readers. Despite that I'm going to keep this post to a one-word demonstration. Here goes.

SOCKDOLAGER  *  Early nineteenth-century term for a climax or crescendo, which in salesmanship might be called the "close" or "finisher." Sockdolager was constructed from sock, a knockout punch, and doxology, a motivational hymn or "verse of thanksgiving" sung near the conclusion of church services. Sermons were once so carefully prepared to maximize the dramatic impact of the sockdolager that clever preachers sometimes noted in the margins where they "cough'd or hemm'd," as Butler alluded to in Hudibras:

And with hearty noise he spoke 'em
The ignorant for current took 'em...
And when he happened to break off
In the middle of his speech or cough,
H' had hard words ready to show why
And tell what rules he did it by....
Have pow'rful preachers plied their tongues,
And laid themselves out, and their lungs;
Us'd all means, both direct and sinister,
I' th' power of gospel-preaching minister?

Sockdolager became a popular word in America for an unexpected event, particularly a violent one. In Davy Crockett's 1835 account of his American wilderness exploration, Bear Hunt, he recalled giving a "fellow a socdolager [sic] over the head with the barrel of my gun." In Huckleberry Finn, Mark Twain wrote: "The thunder would go rumbling and grumbling away, and quit--and the rip comes another flash and another sockdolager." By extension, sockdolager denoted surprise ensnarement by a patented double-pronged fishhook of the 1840s, which upon being bitten snapped together in a fish's mouth.