The Worst Side of Detroit: A Review of Black Muscle by Lawrence Blaine 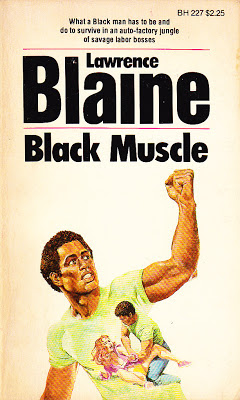 If you've ever come across an Iceberg Slim book and were intrigued by the seedy underbelly of blaxploitation but not the street language used to convey the story (as if!) then Black Muscle is a perfect read for that genre.

This is a straightforward fiction peppered with the 1970s lingo of intercity working class blacks that are often in varying degrees of conflict with the staid white boy power structure in an auto plant.

Turk Edwards, a former boxer turned murderer then ex-convict and finally union tough is brought back to work for his old cronies at the factory and to put some muscle into the campaign of his comrade's   local guild election.

Both sides use intimidation but Turk is willing to inflict fatal punishment on both his adversaries and opponents to advance the black worker's agenda for workplace equality.

Through a series of drives to work with his crew fellow workers we learn about the lives of four men indentured, both fixed and temporarily, to the corporation but with divergent ideas and pathways to betterment.

Each man has his travails but only the protagonist Turk is ready to sacrifice everything to get what he wants. Through a fatal amalgamation of brawn and manic hubris he refuses to be denied attaining his goals while also destroying the dreams of others. His path of destruction leads to retaliation and a final clash between the murky middle and chafed evil with both sides willing to split Hell wide open.

The only part of the book that was overly disappointing was the climax where the writer condensed the ending in such a typical and contrived manner that seemed to be born of either boredom with the story or a deadline to meet. Mind you, this isn't some undiscovered literary diamond buried in the wastelands of lost light but it's a strong piece of fiction from a genre that I rarely delve into. Hopefully I can find his other main fictional release Sweet Street Blues on the cheap as well.
Posted by the at 8:45 PM