The NAZIs were masters of psychological warfare and used the Hegelian dialectic to manipulate mass media to sway large numbers of citizens towards the Reich's endgame. That is, tell a lie enough times and the truth becomes obfuscated and eventually lost in disinformation.

Our media is somewhat more subtle in their approach to propaganda. They provide both the lie and the murky middle of reasonable doubt and then place the truth in a rowboat outside an island and tell you that to believe it is to be a conspiracy theorist. In this way facts become optional and the official media line on all matters becomes the gospel.


In the news caption below a bus accident in Oregon is manipulated to look like a crime scene with the terminology "wounded." A term usually reserved for shootings or terrorist attacks. What other reason to spin a story than to condition readers towards the traumatic reaction towards a mass shooting? 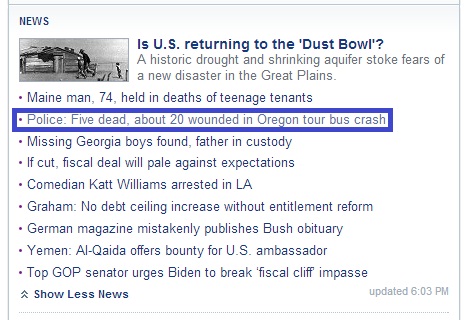 Once the story is accessed the terminology is shifted to proper verbiage, the injury and death totals are listed and suggestive tone is ingrained in the subconscience of the reader. Not that Yahoo is a credible news source by any means but it's well-read and a formidable creator of citizen zombies.
Posted by the at 3:24 PM